Preparing for a Market Crash during Retirement Years

What is the best preparation for a stock market crash? Unless you have a crystal ball in front of you, I don’t believe anyone can predict when that will happen. I know for sure it will happen one day, just like the meteorologist that predicts rain will eventually get it right one day.


Since the last major correction that ended in March 9, 2009, the S&P 500 has climbed from 676.53 to almost 2,500 in July 2017, or almost 270%  in total returns, including dividends reinvested.  Average annual return is more than 30%. No wonder there are so many early people who have achieved Financial Independence by investing almost at the bottom of the market.  Conversely, people who withdrew their investments at the trough would not only have lost almost a third of their fortune, but also the opportunity cost of staying the course, and waiting for the market to recover, and finally profit from waiting.  This, my friend, is the essence of investing for the long-term.

Even though we are closer to a major market correction now than before, it is important to not time the market by making major moves with your investment strategy. Stick to an asset allocation strategy appropriate to your risk profile and your retirement timeline. My experience with overseeing the company pension plan assets tells me that this strategy works best over time. When the equity markets do well, the pension plan tends to underperform due to exposure in the fixed income. And vice versa, during the market crash in 2008, the pension plan was able to escape the worst due to investment in fixed income, which thrived due to shift to government bonds and lower interest rates.

Having said that, I am a little concerned that the current bull market may be slightly overextended due to the following reasons:

Central bankers are starting to raise interest rates beginning with the Federal Reserve Bank of the United States, and now the Bank of Canada. Despite benign inflation rates, I think it is time to unwind the balance sheet of debt.

There is a glut in oil supply. The Saudis are suffering, even though their cost of production is the lowest. Higher cost producing countries such as Canada, the U.S., Norway, will suffer the most.

The stock market has been on a tear for the past 8 years, which surpassed the longest bull market run on record.

Company earnings may be peaking. As measured by S&P 500 trailing P/E ratio, it is almost 27. Normal average is less than 20. Note however, that stock market’s performance is driven by future expectation, and not historical data.

Market is driven primarily by a handful of high tech companies, notably FANG (Facebook, Apple, Netflix and Google (Alphabet).  Emerging FANGS include Amazon, Microsoft, and Tesla. Leadership is definitely lacking. Just so you know, the S&P 500 is a weighted index, and the top 5 companies above comprised 20% of the market capitalization.

A lot of companies are shedding their workforce in order to meet the earnings estimates. Top line growth or sales or decreasing.

Global housing prices have reached an unaffordable level.  Look at the correction that the Toronto GTA market is experiencing now- down almost 18% from the peak in April 2017.

I am not a firm believer that politics drive stock market returns. There may be  few hiccups due to Trump’s presidency in the United States or even impact from terrorism, but markets usually shrug them off.

Here are some of the steps that I am taking to reduce my risk in the equity market:

Start buying precious metals, preferably physical gold. History has shown that the precious metal has a negative correlation to stock market performance. Gold prices were up 25% during the 2008 market correction. And to a lesser degree, gold stocks, too. I would say no more than 10% of your total portfolio should be allocated to precious metal.

Review your asset allocation. Stick to a more conservative portfolio by investing more in fixed income -government and high quality corporate bonds with staggered maturity dates to hedge against interest rate risks. . Even though the current yield is about 3%, it is better to preserve your principal rather than losing 30% in an equity market downturn. Plus, with interest rate rising, you should be able to get a 4% yield. Depending on your investment horizon, I would say no more than 40% should be invested in fixed income.

Keep at least 1 year of living expenses in cash. I have to say that I found this while reading some of the personal Finance blogs, and I must say that this is a great tip. Assuming you have $50,000 in either savings or fixed deposits.  This avoids the need to tap into your portfolio and sell the stocks while they are down due to a market correction.  Assume this is 5% of your total portfolio of $1 million.

Lastly, your equity selection should yield at least 3% in dividends. Including interest from fixed income above,  your $1 million portfolio should provide an estimated 3% return in cash or $30,000 - $160,000 dividends and $14,000 interest per year. Assuming you intend to harvest 3% of capital gains from your equities, which will provide another 3% or $12,000, your total portfolio should provide $40,000 a year in cash, which should be sufficient for a basic retirement lifestyle if you add in CPP and OAS (or even private pension plans) .

In summary, here is my ideal portfolio to ride through a market correction and basically a portfolio for all seasons: 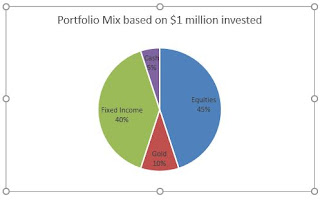 For full disclosure purpose, I have initiated some of the steps above, but have yet to reach my targeted mix.