As a practicing Certified Financial Planner (CFP®), I always advise my clients to look at retirement planning on beyond just the numbers. I can always input different assumptions, i.e. return on investments, allocation between equity and fixed income, longevity and inflation rate to arrive at the desired outcome. Since these are just assumptions used to project outcome for 25 years or more, there could be adverse deviations that could drastically impact the final outcome. A significant and prolonged market correction, and we are certainly due for one, can significantly lower the investment balances.

In addition, a significant piece of the retirement planning or spending involves assumption on one’s health. Although I am not a qualified health practitioner, I do know that as one ages, our health deteriorates, thus increasing the need for medical attention.  The current system in Canada, which is a form of ‘universal health care system’ does not cover prescription drugs, nursing home care, or even the most basis preventive dental care such as cleaning.  Nursing home can cost upwards of $5,000 per month.  Prescription drug for treating cystic fibrosis can cost upwards of $50,000 per year.

I believe if we include the coverage above, retirement planning would be a much easier goal to accomplish.  We essentially eliminate the biggest financial risk to manage, which is our health. As we celebrated Labour Day on September 4, I was pleasantly surprised by Canada Labour Congress’ call for universal pharmacare. There are currently 3.5 million Canadians or 10% of the population that can not afford to fill their prescriptions. In addition, our prescription drug costs are the second highest in the world after the United States. In a 2015 Angus Reid poll, 91% of people surveyed said that pharmacare should be included in the health plan, Lastly, the Canadian plan is the only ‘universal health care’ system in the world that does not include prescription drug coverage.  Please support the plan by signing up via this link or go to http://www.aplanforeveryone.ca/ 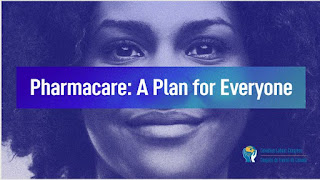 Since the Ontario government has recently  provided free prescription drug coverage to people under 25, I think it is time the Federal government take the initiative to expand pharmacare coverage to all Canadian citizens. To me, this would be money well spent.

A study by the National Health Services in the United Kingdom indicated that their prescription drug costs are among the lowest in the industrialized world. This is due to tough negotiation between the government and the drug companies.  And since the U.K government is the only buyer of prescription drugs in the country, the drug companies have no choice but to deal with them.

Last but not least, drug prices are not uniform across the globe. For instance, Gilead Science, the big biotech company, recently announced that it will expand Hepatitis C generic licensing agreement to Malaysia.  This would lower the cost considerably from the current prescription using Sofosbuvir which costs as much as US$30,000 per person.