My Path to Financial Independence 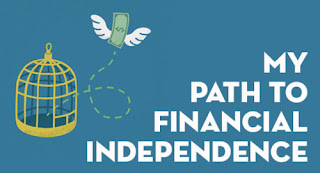 Building a sustainable retirement income portfolio that can withstand market shocks and meet your future expenses requirement is the ultimate goal for everyone seeking financial independence (FI).

For those closer to the normal retirement age of 65, it may be an easier goal to reach compared to millennials seeking early FI.  Given the number of early retires that have been blogging their successes on the internet, one would be forgiven to think that the path is easy to reach.  I truly admire them, but for the vast majority of people, achieving early FI seems an elusive goal.

Do you fit the profile of single, early 30s, have been working in the tech industry for the past 10 years had cashed in tons of stock options in addition to saving a large percentage of your above average take home pay and investing them at the right time (just after the 2008 market crash)? I figure that you would have investment worth at least $1 million by now not counting the equity on your home.

If you are not one of the people above, you are just like the ordinary masses.

The journey of a thousand miles begins with the first step.  Even without the benefit of the above, you can still achieve your FI earlier than age 65.  Twelve years ago, I would not have even dreamt that I could reach FI before the age 65.  With a large mortgage and not having saved sufficiently for 2 teenage children on their way to furthering higher education in a few years’ time, my wife and I consistently  ponder how to make it work and still achieve our retirement objectives. I have a decent jobs that pays fairly well, yet the after tax dollars came and went quickly without much of a trace.

The secret is perseverance. If you keep working towards your goal, there is a light at the end of the tunnel and it is not from the train coming straight at you.

Fast forward ten years later, by the end of 2015, the mortgage was paid off. My oldest daughter graduated from university,. Through her co-op jobs, she not only managed to pay for school, but she had saved some money and invested at the right time, and also found a decent job in her field of study.  My younger daughter had entered university by then (graduating in 2018). My investments not only survived the 2008 crash, but had miraculously quadrupled in value thanks to some stock bets that paid off and also continued contributions to my retirement plan.  I had also survived multiple company restructurings.  I was contemplating a career change at one point, studying part time for 2 years, obtaining my Certified Financial Planner (CFP) and life insurance qualifications. My wife is still working part-time.  The Toronto housing market also experienced one of the biggest boom in history . Despite the recent housing correction, the value of my home had tripled.  The financial part of the FI process had been accomplished wit a little luck and patience. I self-declared FI on January 1, 2016 at the ripe old age of 52.

If I tell you that all’s well that ends well, you would say it is a fairy tale ending. Throughout the journey, I encountered multiple hurdles. There was a price to pay. The stress had taken a toll on my health and had also strained my family and work relationships. I turned colder, bitter and for lack of a better word …… became a nastier person.

All I can say is that I had managed to resolve a lot of these issues. I am also not dependent on drugs anymore to treat my medical condition. I had also become a health freak, working out 5 days a week doing cardio and weight training.  I was so thrilled to find out that my health age is actually 45 based on my physical condition.  I still work full-time, but have also started teaching part-time at a local college.  I find that I am much sharper in my thinking, sort of an Alzheimer in reverse. I am  using my CFP knowledge and providing free advice to help people achieve their financial objectives. I would eventually want to leave my full-time job and focus on pursuing these interests. Teaching, working out, helping others and continue to enjoy my family life are my primary objectives.

You see, money is not everything.  I think one of the biggest flaw with the financial planning process these days is that there is too much focus on the number crunching part and not enough on planning holistically and looking to achieve a more balanced lifestyle.  We have also been lead to believe that we need to save an incredible amount of sum of money in order to retire when in fact there are other income streams i.e. government and private pensions available to supplement our own retirement savings. Also, you will be surprised how much less the majority of us would actually spent during retirement. I actually experimented for the past 2 years to try and live like I would if I had retired and can actually attest to it.

Cheers! And here is to the next 28 years of retirement life. Check out  http://www.cfiresim.com/Based on some fancy computer simulations using historical market returns, there is a 97% chance that I will not outlive my retirement savings  assuming I withdraw $50,000 per year inflation adjusted. Note that I aslo assume that I will die at the young age of 81 in the year 2045 based on the mortality tables so finely prescribed by the actuaries.
at August 09, 2017